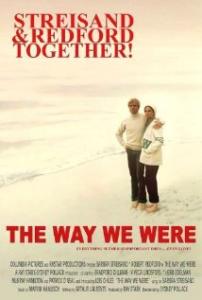 The movie begins with the Katie (Barbra Streisand) running into Hubbell Gardner, an All-American popular jock she went to college with, some time after World War II. Though some other summaries claim it's been about 20 years, that is not really the case. It's probably been more like 10 years since college and Hubbell has written his first novel and later joined the navy while Katie continues to work hard and remains very much involved in the grassroots level of politics. Katie who had a crush on Hubbell back in college is still very attracted to him and soon the two start an "on again off again" relationship. Eventually Katie ends up giving up her voice and her interest in politics in order to hold on to Hubbell and they get married. However when Hubbell begins to compromise his literary talent by abandoning his novel writing for writing Screenplays for Hollywood their marriage begins its downfall. When the government begins its witch-hunt for communists among Hollywood writers and

Post a Comment
No comments yet! Be the first
Subscribe to RSS
goodness is the only investment that's never fails now than forever but love is life which ends in your life ends