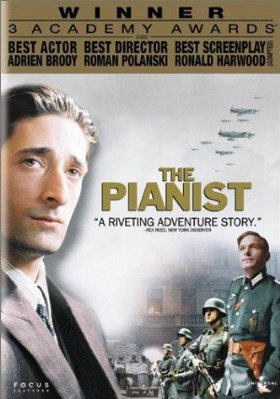 The true story of Wladyslaw Szpilman who, in the 1930s, was known as the most accomplished piano player in all of Poland, if not Europe. At the outbreak of the Second World War, however, Szpilman becomes subject to the anti-Jewish laws imposed by the conquering Germans. By the start of the 1940s, Szpilman has seen his world go from piano concert halls to the Jewish Ghetto of Warsaw and then must suffer the tragedy of his family deported to a German concentration camps, while Szpilman is conscripted into a forced German Labor Compound. At last deciding to escape, Szpilman goes into hiding as a Jewish refugee where he is witness to the Warsaw Ghetto Uprising (April 19, 1943 - May 16, 1943) and the Warsaw Uprising (1 August to 2 October 1944)

A MUST SEE, Love this MOVIE

The swing is amazing. It's cool they were allwoed to do that to an existing statue and were recognized and awarded for their work. I wish it were still there so i could try it out!

I haven't seen this one yet. I just watched Sophie's Choice from my movie list. It is such a buuetifal and tragic movie. I also really enjoyed Life is Beautiful but I haven't seen it in years. When I recover from Sophie's Choice, it always depresses me, I'll have to check this movie out.