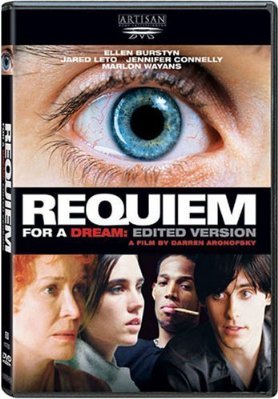 Requiem for a Dream

Requiem for a Dream exposes four paralleled individuals and their menacing addiction to heroin, cocaine, and diet pills (speed). Taking place in Brooklyn amidst the waning Coney Island, the drugs are very easily obtained and keep each main character in its cycle of dependence. The protagonist Harry Goldfarb is your typical heroin junky with an ambitious plan of &amp;amp;quot;Getting off hard knocks,&amp;amp;quot; with help from his cocaine crazed girlfriend Marion and his long time friend Tyrone. Meanwhile his widowed mother is obsessed with the glamor of television and eventually finds her way to a dietitian who pushes her into the cycle of drug induced enslavement.

This movie breaks my heart every fuckin' time. Definitely the saddest movie ever.

Subscribe to RSS
I hate my life, and everybody thinks I'm happy. How foolish people are, wouldn't you agree?